Parents were left in a quandary as to whether a 5.15pm push back on a Sunday evening was a good or a bad thing. On balance, an opportunity to give Country File and Messrs Craven and Baker a swerve and face Guildford on the Surbiton waterbase got the thumbs up.

Mystery surrounds Coach Frankie's team talks pre-game – although he is shortly becoming the Hockey-whisperer as his charges, once again, dominated the first 20 minutes of the game with a brand of passing hockey that belied an U14 age group.

Olly, once again, took charge of matters from a full back role. Olly had previously, as an Oxted player, heard great things about Surbiton and seen the transition made by fellow Oxted players such as Zach Wallace. However, a little know fact that it was a KFC tea arranged by a (not to be named) parent-team manager that sealed the transfer deal: some players yearn for image rights/Champions league opportunities, others feel the draw of a Colonel's Burger and a Family Bargain Bucket.

Again, Geering & Thompson dominated matters in midfield. Thompson was strong in the tackle and continued to play forward into the opponent's circle. Geering continued to carry the ball with skill and balance and was a constant threat to Guildford's strong midfield unit.

But it was youngster Barney who provided the momentum for the Seals to open the scoring. Operating in an inside right role within the oppo's 25, he realised that his opponent had not retreated 5 metres. Now, in the Harcourt household, with three teenage boys, Barney has learnt that you come out third best if you stand on ceremony at the breakfast table, so whilst others would be taking an "after you Claude approach", he dribbled the ball quickly into the Guildford player and earned his team a short corner. Although the short corner wasn't converted, the second phase of play led to Cormac sniffing out a goal near the P spot to score the opener. The second goal followed later with some good forward player from Fordy with Cormac picking up the scraps to finish from close range. On the half hour mark, Dexter, who had been in caged-tiger-who-might-lose-it-at-any-moment mode, scored with a trademark slap-shot finish which drew a sigh of relief from his on-watching family. And breathe Dexter.

And so a 3-0 lead at half time against Guildford was not something to be sniffed at. Shortly after the break Sammie and Jude, reviving a partnership that had been forged on two hour car journeys from Surbiton to Ashford/Marden Russsets/Canterbury in the U12s, combined effectively down the left hand side with the ball being played dangerously across the goal for Dexter to grab his second. He was, arguably, denied a hat trick from the (highly impressive) Guildford keeper who, taking one for the team, upended Dexter as he rounded him. Up stepped Olly for the penalty stroke – whilst others, at such a tender age might think "percentages" (low to the keeper's right anyone?), no such self-doubt ensued for Olly as he stuck it in the rigging in the top right corner.

Guildford's midfield got more into the game as the second half continued. Coach Frankie politely reminded a number of players to "Pass the ball!", but turnovers ensued from U10 festival hockey ball-polishing when a simple pass would have done just fine. Guildford took advantage and scored two goals - both, from memory, celebrated with a parental cry that was part vuvuzela and part wailing cat. Quite what Ian Jennings of Guildford yesteryear would make of that isn't worth thinking about.

All in all a good performance against a strong team. Although it was difficult to tell under the bright lights but a few of the parents, post-game, believe they saw Coach Frankie break into a half-smile… steady boys – each game as it comes. 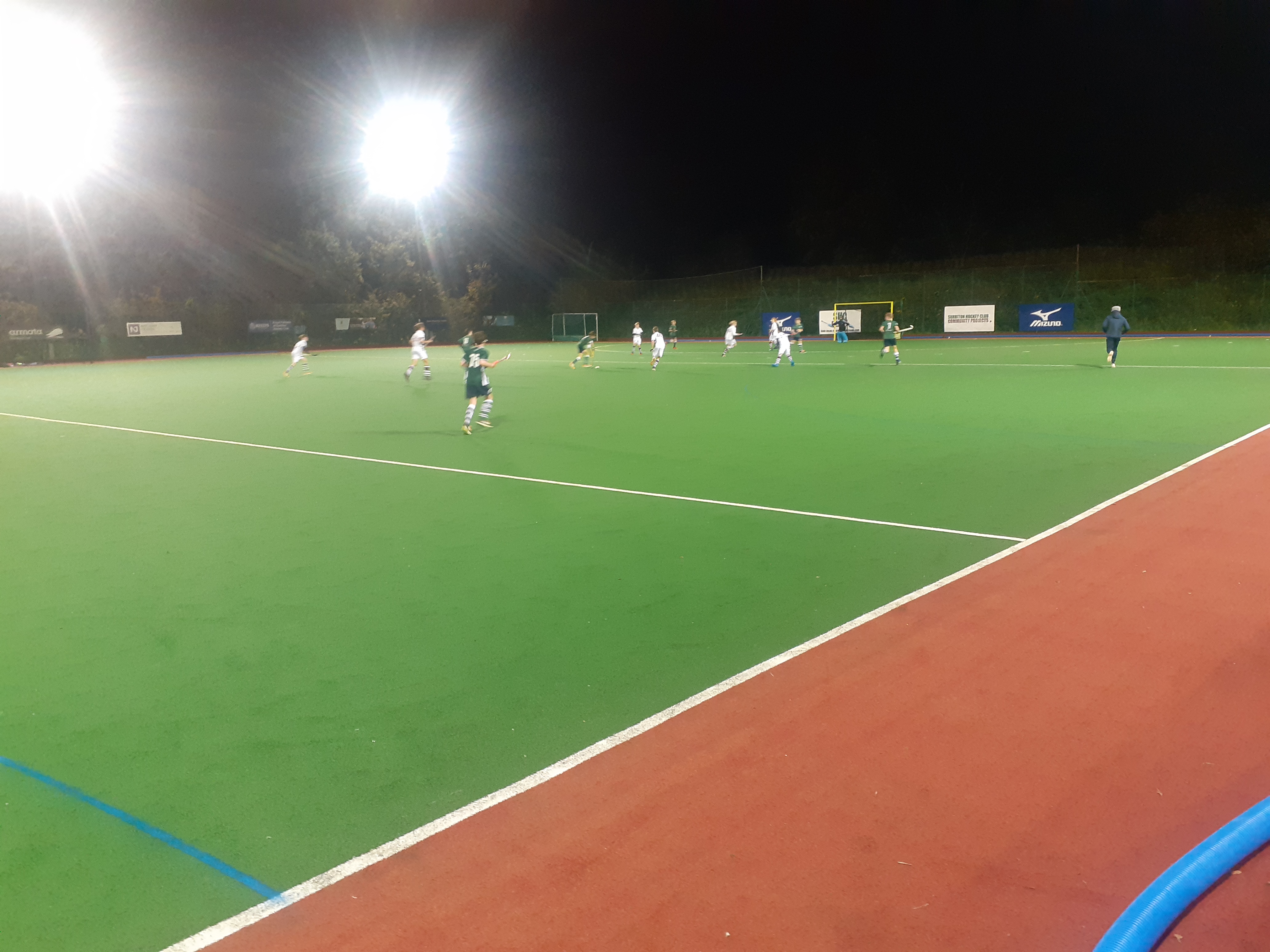