Theun shares his experiences from his season with Surbiton HC in 2019/20 [please note this article has been translated from the original which you can find here].

In the series "Foreign adventure" we share the stories of Dutch hockey players who have played abroad. This week we talk to Theun de Leeuw (18), who played hockey at Surbiton HC in England.

The Champions League hymn echoes through Stamford Bridge, home of Chelsea football club. It is November 5, 2019. The top London team takes on Ajax in the Champions League. It is a competition that will be talked about for a long time.

The Amsterdam club lead 4-1, but after two red cards, they end up having to settle for a 4-4 draw. More than 39,000 spectators were there to see it – including Theun de Leeuw, who together with Tijn van Groesen, who plays for East Grinstead, had obtained a ticket for this memorable match.

His love for Chelsea that Tuesday evening was bigger than De Leeuw's love of hockey. With a white lie, he pulled out of training at Surbiton. "I said I had to do something for school, but they found out at the club that I was in the stands at Chelsea. The following Saturday, as a punishment, I was not allowed to play in the top of the table match against the number two team."

De Leeuw was unhappy with the penalty, but he doesn’t regret his decision to go to the football. Chelsea was one of the reasons why he went to London and wanted to play hockey there in the first place. "I am a huge Chelsea fan. When Guus Hiddink became a trainer there, I started following the club and attending matches."

In addition to his interest in Chelsea, English culture appealed to De Leeuw. "Before I played hockey at Surbiton, I had already been to England a number of times, to Liverpool and London. The English are polite people. And pub culture is very different from the Netherlands. In the Netherlands the music creates the atmosphere in a café, but in the pub people create the atmosphere themselves."

These experiences and a long-held desire to go to London made De Leeuw decide to send an email to Surbiton about a year and a half ago asking if he could do a trial training. "I heard nothing for a month and a half," says De Leeuw. "Eventually I received an email. It was a reply to an earlier email they sent, but I somehow never received it. It asked if I was still interested. Of course I said I was."

De Leeuw, who played with Den Bosch all his childhood, ended up at one of the oldest hockey clubs in the world. Surbiton Hockey Club was founded in 1874 and has been the leading club in England in recent years.

"Surbiton is one of the biggest clubs in England, but it only has two fields," says De Leeuw. "Some English clubs don't have their own field. Wimbledon, for example, plays on a field located in the grounds of a school. The clubhouse is fifteen minutes away. Hampstead & Westminster also has only one field and it is located in the middle of London in a public park. There is a very small clubhouse with only three dressing rooms. I still found it an enjoyable experience."

This is a big difference with Den Bosch. "I was around the club for years, but you don't pay much attention your surroundings. Teammates who have always played in Den Bosch hardly ever talked about how beautiful it was there."

Club culture is not as big in England as it is in the Netherlands, but De Leeuw did notice that the culture is growing. "Surbiton is seen as a fun club. Everyone sticks around, while at some other clubs they go home after showering. At Surbiton, everyone mixes and talks regardless of which team you play in. Then suddenly someone starts singing and they all jump on the tables to dance!

At the club, everyone has a nickname and their own number. Because of my last name, my nickname is ‘Lion’. Whenever I jump on someone's back they all sing: ‘he's got a lion on his back’. It’s funny."

Game day usually ends up with the team out in the city. It didn’t go so well for De Leeuw the first time. "I lost my wallet in the taxi. I also lost my ID and had to go to the embassy for a new one. I got it a day before departure to Barcelona where we were playing in the EHL."

In Spain, Surbiton qualified for the FINAL8 against Bloemendaal, but due to the coronavirus pandemic, the most important European club tournament has been postponed until October. The virus also caused the English league to end prematurely. The regular season was completed, but the cancellation of the play-offs was a heavy blow.

"It’s a pity, because I would have liked to play play-offs," says De Leeuw. "We were proclaimed champion three weeks ago. We haven't been able to celebrate it yet. We have to wait a little longer, probably until August or September, when we will celebrate twice as hard."

Surbiton finished top after eighteen league matches with a six-point lead over Hampstead & Westminster. In a league that is often characterized as physical and defensive, Surbiton scored 93 goals, no less than twenty more goals than the second-highest scoring team.

"We didn’t play with caution or hesitation," said the midfielder, who counted six current British internationals, including Harry Gibson, Zach Wallace and Alan Forsyth, among his teammates. "As soon as we had the ball, we went forward very quickly. We had a good counter, because we had fast, capable players. We played the technical part of the game very well. Other teams had to rely more on passing than on individual skill.

The English game is a bit more physical. I had to get used to that. The whistle is also slower in England than in the Netherlands. Fouls that I thought were yellow were only given a warning. I also had to get used to the English terminology, but I quickly mastered that. And I wasn't used to playing with three at the back. In the beginning I was exhausted after the first quarter!"

De Leeuw is now back in the Netherlands and is training with Den Bosch. He wants to play in the Netherlands next season. "I want to finish school and then go to college. When I have finished my studies, I want to return to England, because this season gave me the taste for more. It's cool to play abroad. " 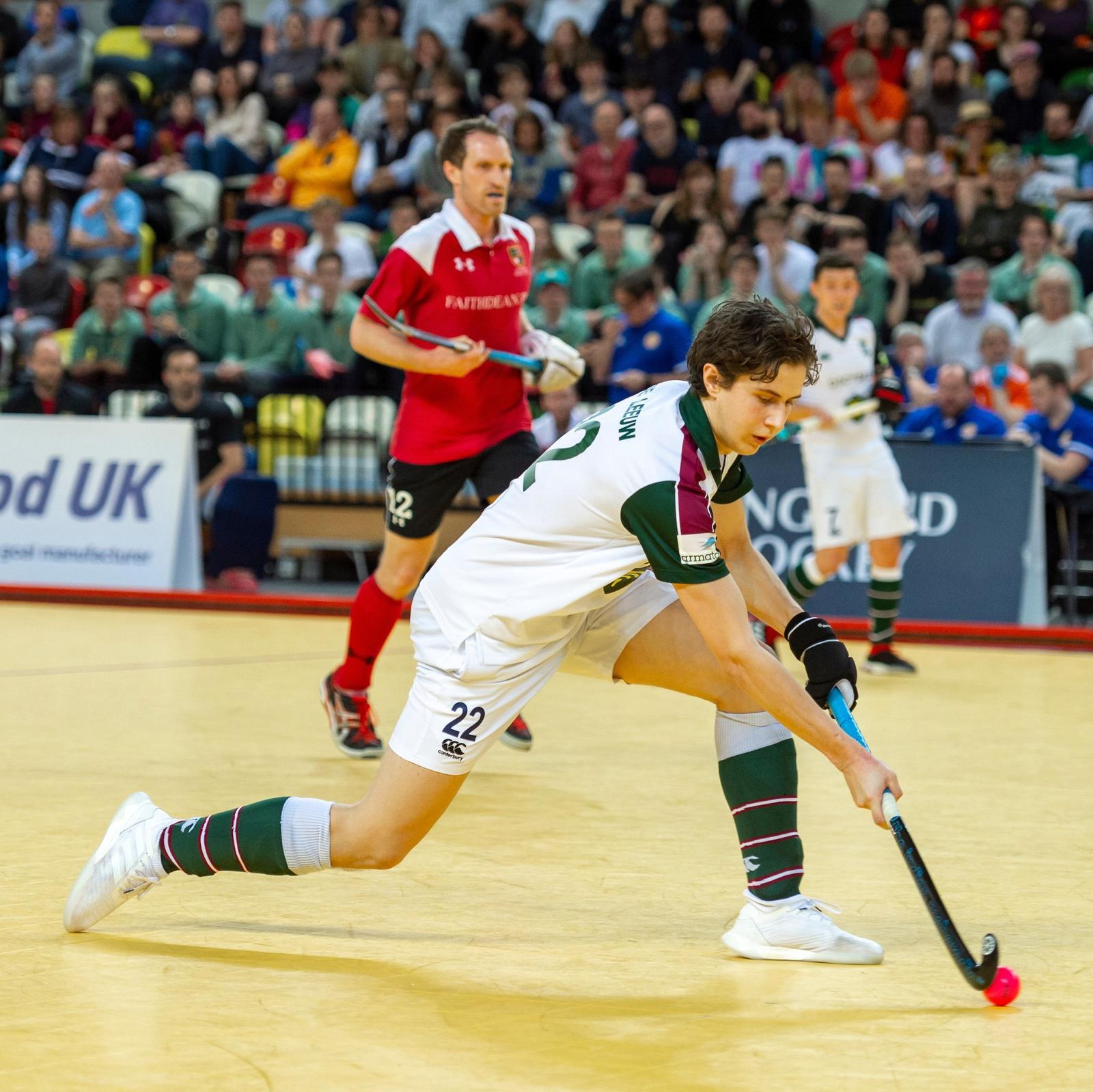