The Boys U14 Seals came from two goals behind to defeat Cambridge in the Tier 1 U14 finals at Lee Valley.

Having just taken receipt of the newly minted EHL emblazoned Mizuno midlayers (thanks Steph) the U14 boys certainly looked the part pre-game. Frankie was at the helm and your correspondent had morphed from the Team Manager role to appear as the Physio in the EH programme which also failed to feature the team photo (eh?).

The smelling salts were probably called for in the opening 15 minutes as the Cambridge side had the better side of affairs with the Surbiton team not themselves. Somehow SHC were 2-0 down after about 20 minutes and were indebted to Coxy for a goal line clearance that kept the Seals in the contest.

Cometh the hour, cometh the man. Dexter had spent the previous day with a light chest and biceps sessions (coupled with some whey protein drinks) and began to exert pressure on the oppo’s defence that began to draw turnovers and PCs. The PC count grew and Surbiton went into the half still 2-0 down but with their tails up and a mini Frankie hairdryer at the interval to set them straight.

The left-half-who-shall-not be named found himself in the screen then in the technical area for a two minute breather for a stick tackle. Apart from that blip normal service was resumed as Messrs Toby, Geering and Bennett got their mojo back and began to pass the ball around with more confidence and find players in space in the channels.

Eventually the PC count grew and Cowling applied his trade mark Kane Williamson deflection / run down to third man to open the SHC account - look in the book son. Toby was now firing on all cylinders and was tormenting the oppo with his quick hands and some good advantage from the umpire (a less polite interpretation might be that the umps had seen how naff the PC routine had been) saw the Haslemere youngster beat the keeper with a fine solo effort.

The momentum was now with the Southerners and it was no surprise to see Toby work a space for himself in the D to beat the keeper who had been excellent all game. Louis showed his good first touch and skills to almost fire a fourth and Allsop kept things tight at the back using his speed and strong low forehand tackling. Fordy showed his Leatherhead FC nous by running the clock down in the final few minutes and Olly took one for the team in preventing a counter attack which drew plaudits from his onlooking older brother.

So, a 3-2 victory to finish a cup run with ups and downs. Dexter celebrated in style and was pleased to check in with the U18 SHC girls who won their game against Repton - that boy could create havoc in the Ferry Inn, Salcombe in the years to come. Thanks to Frankie and the fantastic parental supporters this year. 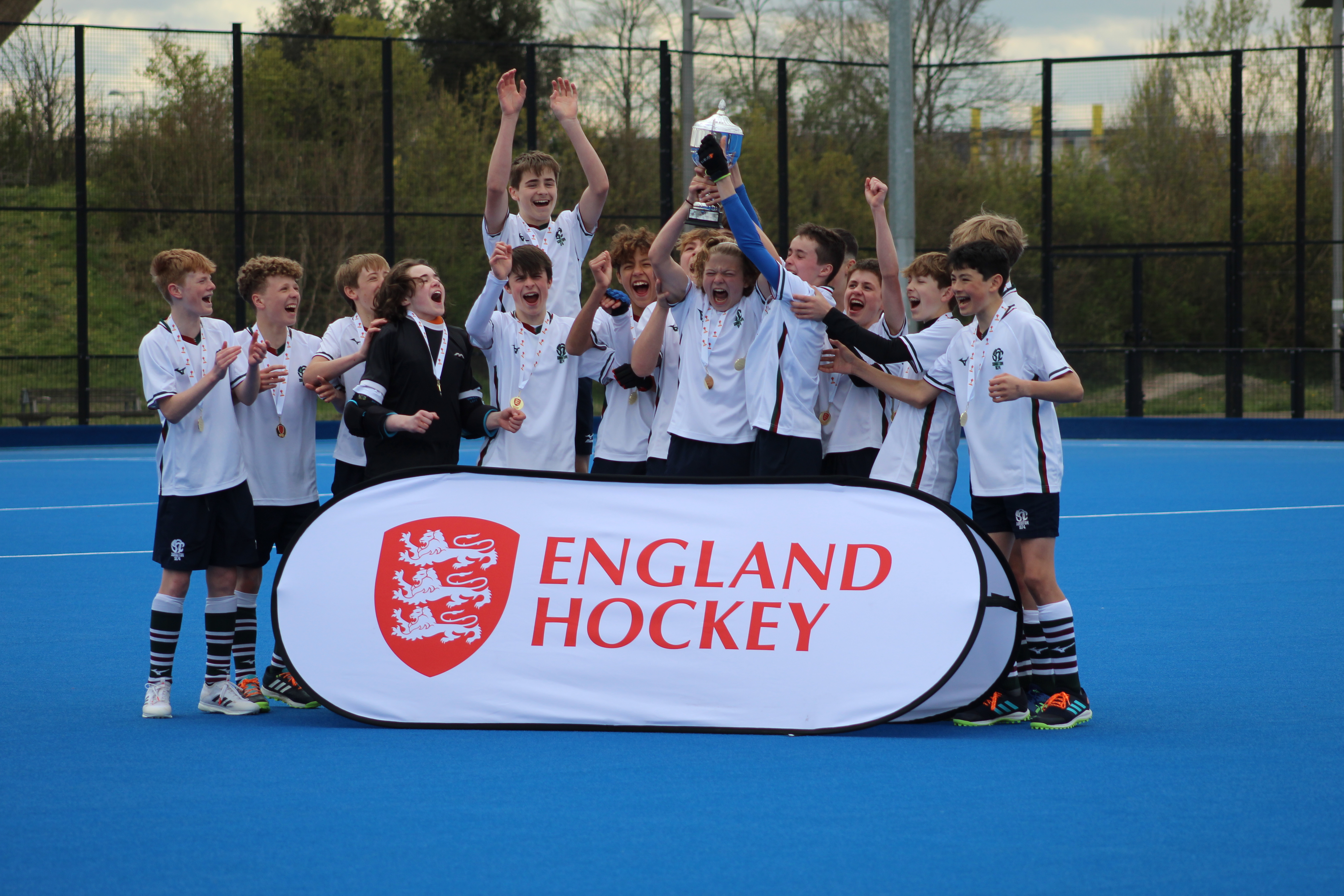